Here is the big news you were waiting for!! 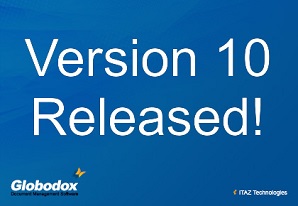 We last completely overhauled Globodox when version 5 was released. Your response to the changes were terrific and we added a lot of customers to the Globodox family since then. Over the years we have received newer features requests, tools and technologies have changed and we have discovered new areas of improvement. Keeping all this mind, a couple of years ago we started work on the next generation of Globodox. We are pleased to announce the release of version 10 which is the result of all that hard work. This is definitely one of our most important releases.
We know this release was delayed but we had to overhaul the entire platform on which GLOBODOX is built so that we can incorporate the latest technologies in GLOBODOX. One of the advantages of the new platform is that we will be able to make enhancements to GLOBODOX quickly and make these enhancements available quickly to our customers. You will see a glimpse of this in the coming weeks, so stay tuned to our blog to get updates.

Here are some details about the new version…

The underlying framework of GLOBODOX has been completely overhauled. This has taken us a couple of years to accomplish and we are very proud of what we pulled off. Since the framework is behind the scenes, in this release you may not see too many visible changes. However our work on the framework enables us to add new exciting features faster, fix reported bug fixes faster and release updates faster.
We have a long list of new features and enhancements lined up for the immediate future. If all goes well you will start seeing new GLOBODOX releases with new features every few weeks!

Some of the new features in this release are listed below…

You can now edit saved queries in GLOBODOX.

You can now see the values you searched for, highlighted within the found documents. This feature only works with PDF files and is currently in beta (we are working on improving the implementation).

You can now set an inactivity timeout for individual apps in GLOBODOX . These apps include GLOBODOX Desktop Client, GLOBODOX Web Client and any future modules we may support.

1. Fixed: GLOBODOX Drive not working on Windows 10.
2. Fixed: Virtual Printing not working for multi-lingual files.
3. Fixed: Certain linked documents being unlinked when a Document type is deleted.
4. Fixed: Occasional error when previewing certain Word and Excel files.
5. Fixed: Login dialog not displayed occasionally.
The full setup GLOBODOX 10 – is now available to download!! You can get it from here.
The official release date of this version is December 22 2015. An upgrade setup will be available for our existing customers by the end of next week.
Please feel free to get in touch with us if you have any questions regarding the new version.

Speak with our experts…

The Notification Service module can be purchase along with GLOBODOX Suite.

The GLOBODOX Workflow Cleanup Utility removed all the logs of Completed and Cancelled workflows from the Workflow Monitor window.